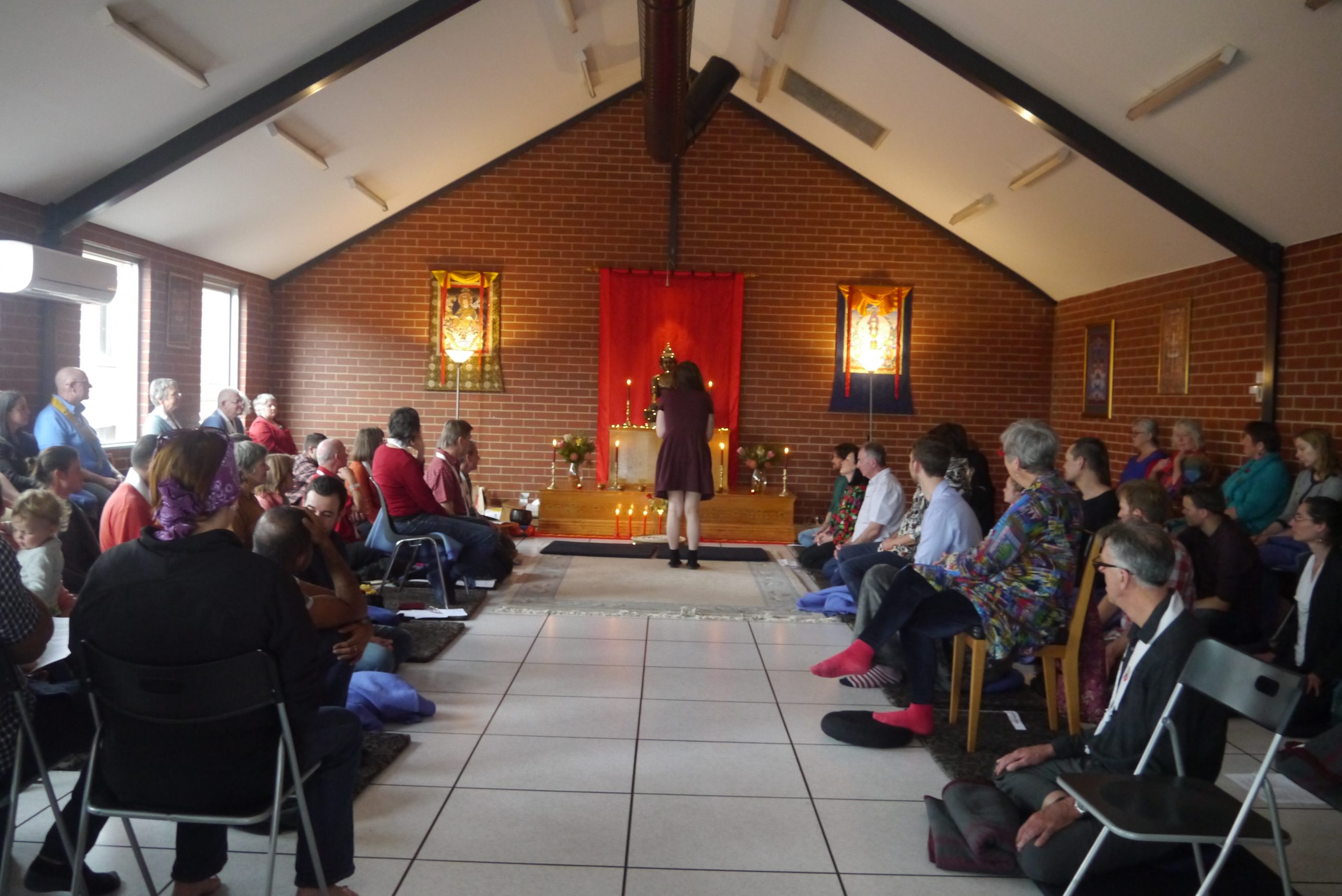 A Buddhist Community based on friendship and a shared vision of what is most valuable in life.

The Melbourne Buddhist Centre is a community of Buddhist practitioners or Sangha, supporting each others practices and making available the Buddha’s teachings of Ethics, Meditation and Wisdom to people of Melbourne and beyond. We meditate, study, go on retreat together and in the context of our shared practice, allowing spiritual friendships to develop.

Anyone is welcome to help cultivate this vision at the Melbourne Buddhist Centre, whether that is in person or online. You can just drop in for a class or take your involvement much further, making friends and joining in with the community.

Some of the Order Member Community at the Melbourne Buddhist Centre.

Viryasiddhi is the Chair of the Melbourne Buddhist Centre, and was ordained in 2012. His name means, Accomplished in Energy and Valour. He leads Men’s Dharma Study at the MBC on Monday night and supports those men who wish to join the Order. Serves as Chairperson on the MBC Management Committee.

Dantacitta was ordained into the Triratna Buddhist Order in 2011. Her name means, She who’s Heart/Mind is Tamed. You will often see her at the Centre at our meditation classes and at Women’s Study Night.

Lokeshvara, a senior Order Member from the UK, is president of our Centre. Lokeshvara visits us, alongside his role as International Order Convenor, and meets up with sangha members and the Management Committee to discuss how we are going. He is an excellent retreat leader and Dharma practitioner.

Vimuttinandi was ordained in 2009 and her name means, Delights in Liberation. Vimuttinandi is the Women’s Mitra Convenor, supporting women who have made a commitment to practicing Buddhism with the Triratna Buddhist Community. She leads Women’s Dharma Study at the MBC on Tuesday night.

Apada is the Men’s Mitra Convenor, supporting those who have made a commitment to practicing Buddhism with the Triratna Buddhist Community. Apada was ordained in 2014 and his name means in Pali, The Trackless One. Apada leads the meditation day retreats and meditation and Buddhism courses throughout the year as well as being part of the Men’s Study Team. Serves on the MBC Management Committee.

Rijumayi was ordained in 2014 and her name means, Filled with Integrity. She is part of the Women’s Study Team and likes creating opportunities for families to access the Dharma. Serves on the MBC Management Committee.

Siladasa was ordained in 1992 and his name means, Servant of Ethics. He is an excellent Dharma teacher, running Introduction to Buddhism courses and leading Dharma Study at the Centre. He is a Private and Public Preceptor and supports and mentors men wanting to join the Order.

Sanghapurna was ordained in 2018 and his name means, Fulfilled by the Sangha. Serves as Secretary on the MBC Management Committee.

Padmasiddhi was ordained in 1996 and his name means, Lotus Success. He is happy to share his love of the Dharma and you will find him at the MBC most Tuesdays and leading the monthly meditation day retreats. Padmasiddhi currently managers the MBC Bookshop.

Varadhi was ordained in 2020 and her name means, Highest Wisdom. She is involved in activities for under 30s, Women’s Study and sharing the Dharma through talks and courses. Varadhi is currently the Young Dharma Coordinator for Australian and New Zealand.

Arunamalin was ordained in 2004 and his name means, Surrounded by the Dawn Sun. A leader of Men’s Study on Monday Night and meditation courses. He is a Private Preceptor, supporting and mentoring men who wish to join the Order.

Maitrikashin was ordained in 2018 and his name means, Shines with Metta. Maitrikashin is the MBC Safeguarding Officer.